There are two types of custodial accounts, UTMA (Uniform Transfers to Minors Act) and UGMA (Uniform Gifts to Minors Act). UTMA accounts have replaced UGMA accounts in most states and the District of Columbia. Each allows for creation of an account for a specific minor child. An UTMA can hold cash, securities, real estate, and other property. Often a parent is the custodian. The assets in the account belong to the child. The child is entitled to the account assets when he or she reaches age 18 or 21. Income in the account is taxable to the child in the year earned.

A 529 plan is an investment account that grows tax-free. Withdrawals are not taxed if used for qualified higher education expenses, or for elementary or secondary school tuition (the latter limited to $10,000 a year). 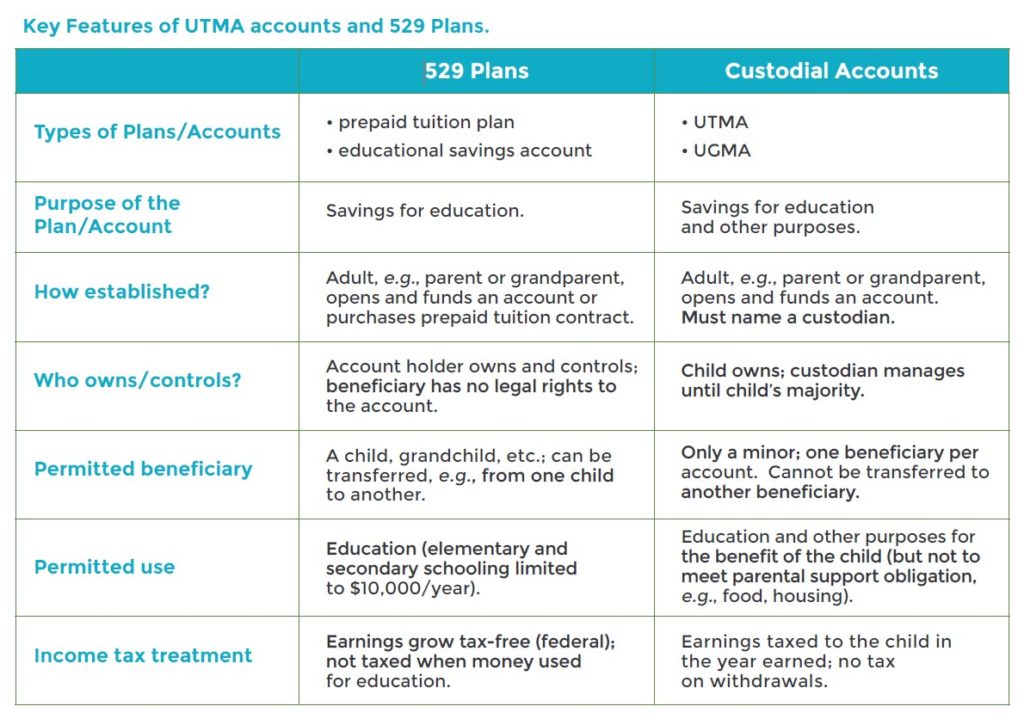 Considering Accounts for a Child in Settlement Negotiations

In Maryland and Virginia, the legal child support obligation ends when a child reaches age 18 or graduates from high school. A court cannot order a parent to pay for college. In the District of Columbia, the support obligation ends at age 21. A court could order a parent to pay for college, but the child may not finish college before that age. Parties negotiating a marital settlement agreement often wish to include provisions for college expenses. When they do, the terms of settlement should take account of existing custodial or 529 accounts as well as the possibility a parent will create such an account after the divorce.

Because the assets of a custodial account belong to the child, a parent or other custodian must manage the account for the benefit of the child, not the custodian. For example, in the 2021 case of Royzman v. Royzman, a custodian-father withdrew all funds from his daughter’s UTMA account to pay his attorney’s fees in the contested custody case. He argued it was in her best interest that he do so. The Maryland Court of Special Appeals disagreed and affirmed the trial judge, who removed the father as custodian, ordered him to reimburse the UTMA and provide a full accounting to the mother. In a 1990 Maryland case, Brodsky v. Brodsky, the father agreed as part of a divorce settlement to pay for the daughter’s college expenses. To meet his future obligation, he began saving in a custodial account and used these funds to pay for college. In a suit filed by the now-adult daughter, the court ruled the father was wrong to use the UGMA funds. The funds belonged to the daughter; he could not use them to satisfy his own contractual obligation. In both cases, the custodian ran afoul of the law in thinking he could use a child’s custodial funds to meet an obligation of the custodian.

Parties negotiating a divorce settlement that will include an obligation for college can avoid what happened in the Brodsky case by including terms for existing custodial accounts and accounts a parent may create after divorce. For example:

A 529 plan could hold upwards of $300,000. It may be funded with a parent’s separate property, with marital property funds, or with monies from grandparents that they intend for the child’s benefit. Courts in some states have held that a 529 account funded with marital property money and held by a parent is divisible property at divorce. Other courts have held that parents intended the transfer of marital property to a child’s 529 account to be a gift to the child and not divisible. Courts in Maryland, Virginia, and the District of Columbia have yet to address this issue. This uncertainty means divorcing parties should negotiate terms for handling a 529 account to carry out their original intent to provide for education and to avoid future litigation. The marital settlement agreement can include the following:

Divorcing parents should collaborate with their lawyers to build an agreement that fulfills their shared goal of educating their children and that takes appropriate account of existing savings created for that purpose as well as a parent’s post-divorce savings.