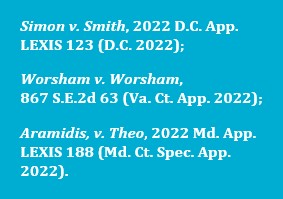 There are two types of custodial accounts, UTMA (Uniform Transfers to Minors Act) and UGMA (Uniform Gifts to Minors Act). UTMA accounts have replaced UGMA accounts in most states and the District of Columbia. Each allows for creation of an account for a specific minor child. An UTMA can hold cash, securities, real estate, and other property. Often… MORE >

Parties to a premarital agreement are free to make decisions during the marriage that alter their financial circumstances so long as they meet their contractual obligations. Post-execution actions can strengthen the validity of the agreement, result in a claim that the agreement has been revoked, or leave the agreement intact but change the economic outcome.

The low standards for validity create opportunity for a claim of duress, especially when a proposed agreement is presented close to the wedding or a weaker party does not get legal advice. (These claims rarely succeed.) Contract law acknowledges that a party may ratify a contract, thus waiving a duress claim. Acceptance of the benefits of a contract is generally considered ratification. When the agreement requires… MORE >

The value and popularity of cryptoassets – a term that comprises everything from Bitcoin to other cryptocurrencies and includes nonfungible tokens (NFTs) and utility tokens – has grown exponentially in recent years. In November 2021, Bitcoin reached an all-time high of over $65,000. In March 2021, Christie’s sold a fully digital, NFT-based work of art for $69.3 million. Many people are paying attention to the increasing value of cryptoassets and are acquiring cryptoassets to hold for their own investment. It is now easier than ever to obtain cryptocurrency through popular apps, such as Venmo or PayPal. The internet has made available step-by-step guides teaching how to acquire NFTs and other tokens. Whether you currently hold any cryptoassets or plan to acquire them in the future,… MORE >

In July 2021, at its annual meeting, the Uniform Law Commission adopted the Uniform Cohabitants’ Economic Remedies Act (UCERA). Cohabitants already have the right to enter into a written or oral contract under general contract law principles. If enacted, UCERA would create statutory recognition of these rights and would expand the bases for cohabitant property claims.

UCERA has not been adopted, or even considered, by the legislatures of Maryland, Virginia, or the District of Columbia. It seems unlikely that it ever will. However, it addresses a problem that will continue to exist when two people live together, acquire property, make promises to each other about sharing assets upon death or dissolution, or when one party believes they have done so.  Whether UCERA is ever adopted,… MORE >