The District of Columbia, Virginia, and Maryland all have laws that revoke at divorce either the entire will or the portions benefitting a now-former spouse, but the laws in these jurisdictions do not provide the same rules for beneficiary designations. The choreography between beneficiary designations, divorce, and marital agreements is unique and does not squarely align with laws governing divorce and will revocation. 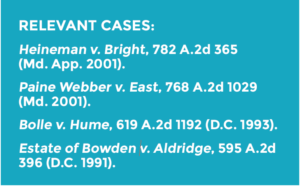 A marital agreement must contain an express waiver of an expectancy, if that is what the parties intend, such as a statement that each party expressly waives any rights under a previously-executed beneficiary designation. Parties entering into a premarital agreement may wish to include express-waiver language as to a retirement account that provides for benefits to go to a spouse by default; a Maryland court held that a premarital agreement divested a former spouse of benefits under such a beneficiary designation.

On the other hand, a marital agreement may provide for a surviving spouse or former spouse to receive certain benefits at the other party’s death, such as life insurance or an IRA. If the spouse obligated to provide benefits fails to do so, the survivor’s remedy may be to seek a court ruling that the surviving spouse or former spouse is the true beneficiary, or that requires the named beneficiary to pay over the asset to the rightful owner.

The Virginia statute does not revoke a beneficiary designation under an employer-sponsored life insurance policy as the right to these benefits is governed by a federal statute. It also does not apply to benefits under the Federal Employees’ Group Life Insurance program. These, too, are governed by federal law. In both cases, federal law preempts state law, meaning federal law, not state law, controls. Virginia, in 2012, began requiring divorce decrees to include a notice to the parties that beneficiary designations may not be automatically revoked and that parties should follow provider instructions regarding beneficiary changes.

It is best practice to update one’s estate planning documents or, at least have them reviewed, after a marital separation, and to make appropriate changes to beneficiary designations after execution of a marital agreement and, sometimes, again, after a divorce. Failing to do so may not only produce unintended consequences, but could also result in a costly and bitter dispute amongst family members.