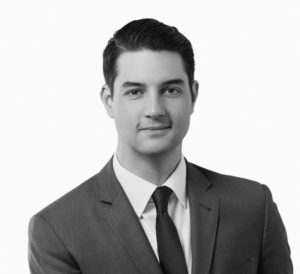 In June 2018, Eric P. Bacaj joined the firm as an associate after eight years as a criminal prosecutor: almost four years in the Bronx District Attorney’s Office and four years as an Assistant United States Attorney in Charleston, West Virginia. As a former prosecutor he brings a wealth of courtroom experience to his new position with the firm’s Divorce and Family Law Group.

With nearly all of his extended family in the DC area, joining Pasternak & Fidis was a homecoming for Eric. At Denison University, in Granville, Ohio, he got an undergraduate degree in Political Science. In his second year, he took a course on the Supreme Court from Susan Gellman, a civil rights lawyer, who taught it as a typical law school course, with a law school casebook and the Socratic method, requiring students to make legal arguments and challenging their arguments, the way a judge does in the real world. Eric loved this experience. As a result, he helped start a moot court team, participating in competitions against other undergraduate teams in making oral arguments to a panel of judges. Law school was the next logical step.

He got his law degree in 2010 from Catholic University. He considered other law schools but took a good piece of advice and decided to go to school where he wanted to live. In law school, he took every opportunity to get legal experience, especially in the courtroom. As a third-year law student, he was a law clerk in the Montgomery County State’s Attorney’s Office where he tried non-jury cases, such as driving under the influence and misdemeanor drug possession, under the supervision of a lawyer. In misdemeanor court, the prosecutor is given a stack of files of cases set for trial that day. He must review the police reports, interview the arresting officers and witnesses in the hallway, negotiate guilty pleas with defense lawyers, and try the cases of defendants who choose to go to trial. Over his five-month stint, Eric tried 10 to 20 cases, once trying three cases in a single day.

After law school, Eric joined the Bronx D.A.’s office. From day one, he was in the courtroom—for arraignments, calendar calls, and motions hearings. He spent a significant amount of time interviewing witnesses to draft criminal complaints and to prepare them to testify. After 10 months in misdemeanors, Eric was recruited to prosecute sex crimes against children. He thought it over for several weeks before deciding to take on this very difficult challenge. During his three years in the Child Abuse and Sex Crimes Bureau, he worked with child victims through one of the most traumatic times of their lives. A key experience was learning to interview the child-witness. These were often multi-disciplinary interviews with a representative from a hospital, a social service agency, and law enforcement.

After several years, Eric took an opportunity to move to the U.S. Attorney’s Office in Charleston, West Virginia, where he prosecuted individuals and companies for white-collar crimes, such as violations of the Clean Water Act and the Bank Secrecy Act. During his time there, he helped prosecute several high-profile cases, including a company responsible for a chemical spill, a doctor who ran a large-scale pill mill, and a financial institution that violated the Bank Secrecy Act.

Going from state to federal court was a culture shock. In his first motion hearing, where he had to defend the seizure of assets related to an environmental crime, Eric’s opposing counsel was a former U.S. Attorney, the judge was a former U.S. Attorney, another member of the defense team was a retired judge of the U.S. Court of Appeals for the Fourth Circuit, and his boss, the sitting U.S. Attorney, was in the audience. The courtroom was full of spectators, including a national environmental reporter and other members of the press. There were several million dollars at stake. Two corporate officers ultimately went to jail.

In one of his last matters at the U.S. Attorney’s Office, Eric was deeply involved in an investigation resulting in the indictment of a sitting justice of the Supreme Court of Appeals of West Virginia for fraud, lying to the FBI, and misappropriating a historic desk belonging to the court.

When Eric is not at work, he is at home with his wife Becca and their two sons, Hudson, four, and Sawyer, two. A girl is due in October. Eric loves sports, especially the Nats, music,
playing the guitar, listening to the Beatles and the Avett Brothers, running, skiing, fly fishing, and being outdoors. Though only four and two, the boys have already gone on hikes with Eric and Becca in the New River Gorge and have ridden the miniature train at Cabin John Park countless times. Eric and Becca enjoy wine tasting, especially when coupled with travel, such as to Napa Valley, where they honeymooned, and to upstate New York. They also love musical theatre; a favorite is Gypsy.

The move from Assistant U.S. Attorney to family law is somewhat unusual, but for Eric it seemed like a natural decision. He chose family law because he wanted to use his trial experience to represent individuals with problems he could help solve. The skills he honed in criminal court are transferable, such as interviewing and fact-gathering, preparation of witnesses, organizing exhibits, and putting together a coherent courtroom presentation. From white-collar crime to divorces that have complex property and support issues is also a natural transition. Financial crimes
often involve huge mounds of documents that must be combed for useful information. For example, Eric and his team issued over a hundred subpoenas in one complicated financial case, receiving hundreds of thousands of pages of material in response. To successfully resolve the case, Eric helped organize the documents and figure out what mattered to the case (and what did not). The ability to organize documents—and to find and use the relevant information in them—is a skill needed in many divorces. Eric brings his prior experience and the skills he learned to his new position as a divorce and family lawyer with the Firm.